More Stories
Justified… The word rang in my ear, as did my youth pastors definition of the word… "just if I'd never sinned." For almost eight years I had held the idea in my head that I was incredibly dirty, demon possessed and, above all, the worst of sinners. That all started to melt away as the word rang again in my ear…. Justified. 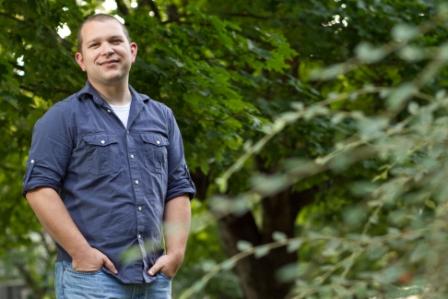 My story is not all that unique. Although I was growing up in what appeared to be a wonderful Christian family, the truth was far different. My family attended church faithfully every Sunday, and my brothers and I all accepted Christ when we were very young. I grew up not only knowing the Lord and His Word, but also with a deep zeal for sharing my faith. I remember evangelizing the neighborhood kids when I was six. I also knew what sin was, and could never really go very long after I had done something wrong before weeping with confession. Behind the appearance of an all-together family, however, were hidden a lot of serious problems.

Like a lot of men who struggle with homosexuality my early childhood held many of the same components that feed this struggle. My father was emotionally absent until I was in the fourth grade, then, almost out of nowhere, my parents announced their divorce. It was a bitter and extremely painful period of my life. My brothers and I had visitation with our dad for a few months. That soon ended and we didn't see him for almost five years.

My dad wasn't there to teach me those seemingly unimportant but ultimately crucial lessons. I never really learned to act or conduct myself like a man or even to understand what it means to be a man. And I certainly never learned how to do the whole sports thing. When other boys were starting to get into basketball or baseball or whatever, I was learning how to cook dinner for the family and do the house cleaning. Although these skills are invaluable now as an adult, on the playground and in gym class these skills didn't earn me any points with the other guys. And to make matters worse, whenever I saw any of the neighborhood boys doing things with their dads, I felt angry. I was angry with my dad, angry with my mom, and very angry with God. I began to feel extremely separated and alone.

The youth pastor at the church I attended had strong views about homosexuality. He told stories about how, before he was saved, he would beat up "queers" in a park frequented by homosexuals in his hometown. He also endorsed a theory to us that people who struggle with homosexuality or who are homosexuals were demon possessed. Because of that belief, I spent time every night for about four years begging God to remove the "demons" that were in me causing me to feel the way I did towards men.

It was obvious to me that I could never tell this youth pastor what I was dealing with. He only showed approval to the extremely good and spiritual teens. If I told the truth I wouldn't stand a chance of approval. I resolved that the only way I could make up for how bad I was inside was to do as many good Christian things as I could. I believe that God wouldn't love me unless I kept up my performance. It wasn't long till I decided that I must be gay, because no matter how much I prayed for the demons to leave, I still felt the same. Regardless, I decided I would try my best to live a "holy" life and ignore my homosexuality.

The Christian life can only be lived so long on human effort. Five years after deciding to live a "holy" life, I was sick of it. God seemed to be exactly like that youth pastor, only pleased with how well I was performing. After five years of doing everything I could in my own effort to please God, I was tired. I was tired of hating myself, and tired of being lonely. Trying to ignore the pattern of fantasy and masturbation were only seemed to fuel them. The discovery of Internet pornography made the intensity of my struggle almost unbearable. At this point I literally told God, "If I have the opportunity to get into a gay relationship, I will!"

Shortly after making this statement to God I met a guy in my church who seemed like he needed a friend. Being the wonderful Christian that I was, I decided I would reach out to him. Of course, there were not good motives behind my action. I was attracted to him. What I didn't know was that he was a closeted homosexual himself, and was attracted to me as well. It took about a month for our friendship to become sexual. The whole relationship lasted about three months. For the first month, I felt loved and accepted for the first time, and that felt wonderful. The other two months were a different story. As a Christian indwelt with the Holy Spirit, my actions brought me extreme conviction. I could not reconcile my faith to my actions. I decided to break all ties with him and to go back to being "holy". Only this time, I felt even more determined that my performance must be flawless.

One month after leaving the relationship, I decided to work with the youth ministry at my church. The old youth minister was gone and a new couple had come to replace him. James and Amy Payton welcomed me to their youth staff, no questions asked. With my new determination to be "holy" it wasn't long before I was made "assistant director of youth ministries". I continued to hide my secret and perform as well as I could for God and for this new couple, but something was different this time. As I worked for this couple, I began to feel valued not just as a laborer, but for just being me. I couldn't put my finger on one thing they ever did to make me feel this way. It was everything they did. I began to feel almost comfortable around them. I continued to work with them for almost two years, the whole time hiding my secret.

Then one night God brought an unexpected twist to release me of my secret. A touring drama ministry came to perform at my church one night. As I watched them perform, something stirred in me. I wanted to be a part of this group more than anything I had ever wanted before. After their performance I went to the director and asked how I could get involved. He happily handed me the application and left. My heart sank when I looked at Question 3 on the application. "Have you ever been involved in homosexuality?"

One week later I was in James and Amy's dining room, weeping uncontrollably, I couldn't even look them in the eye as I tried to confess what I had been struggling with for years, and what I had done two years earlier. I couldn't say the words, but as it turned out, I didn't have to. As I sat there weeping, James opened his Bible; he began to read 1Corinthians 6:9-10. After finishing he asked, " Drew, is your sin in there?" All I could do was nod through my sobbing. Amy's words hit me like a ton of bricks. "We already knew, we've known for almost two years." As I sat there trying to comprehend the magnitude of what that meant, James continued, " let me finish the passage and that is what some of you were. But you were washed, but you were sanctified, but you were justified in the name of the Lord Jesus Christ and by the Spirit of our God." That was the first night I knew that God loved me unconditionally, he had shown it through James and Amy.

Since that first confession, God has brought me so far. It has been almost three years of relearning who God is and who I am in Him. Freedom came for me with confession. As I continue to understand this struggle, it continues to lose its grip on me. I know that God has delivered me out of the bondage of homosexuality. Although I may still be tempted at times, those waves are slowly fading away. I may still struggle with this on some levels for the rest of my life. I don't really know for sure, but I now have the freedom of knowing whom God made me to be, and who God sees me as. I am now looking forward to all that God has for me, maybe marriage, maybe kids, probably so! What a freedom!

For more information on Drew and his ministry "A Living Letter", please visit and support: www.alivingletter.org