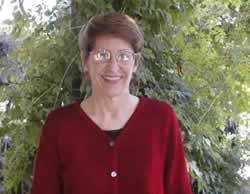 I had a good home with parents who cared about me, provided for me, and wanted the best for me. However, just like anyone else, my parents were not perfect. My dad was a very good and thoughtful man, but did not allow anger or negative emotions in our family. My mom was a wonderful person, but I don't ever remember her being affectionate with me or holding me except when she greeted me at the airport. She was a very nice and good person, but very quiet and undemonstrative. I don't ever remember having heart talks with her, or much conversation with her at all. I do remember playing sports with her off and on, and enjoying that very much. When growing up, I tended to be in my own dream world much of the time, except when I was playing sports. I didn't talk much, and it never occurred to me to share how I felt about anything, as I did not have this behavior very strongly modeled to me by my parents. I now realize I suffered from detachment, and was unable to experience the feeling of love from others. This was because I never felt real love from my parents or any other parental figure. I knew intellectually that they loved me. I just couldn't feel it. The main mechanism for our bonding together was through playing sports.

Our family lived overseas in Iran because of my dad's job there. Every summer we would travel back to the states to be reunited and reacquainted with the rest of our family. In Iran, I learned to play tennis from the Iranian Davis Cup players, and in my teens I began playing the Northwest tennis circuit during our summer vacations. I became the top player in the Northwest in the 16's and 18's, and ranked highly in open play as well. Dad loved my athleticism, and did everything he could to help me in my tennis. I knew he was very proud of me because I was a "natural" athlete. I needed him to always be proud of me too, because this was the only way I knew of to feel loved. So whenever I performed well in sports or any other area in life, or whenever I was able to impress anyone and make them think I was special in some way, I felt loved. I didn't understand that love involved an open, honest, vulnerable relationship with another, and that it wasn't necessary to impress someone to get them to like you.

When I was a junior in high school, a friend loaned me a book that talked of the reality of Jesus in present day life. For some reason, I knew the Bible was true and that Jesus was truly God. Looking back, I know now that was God in His kindness, drawing me to Himself. By His grace, I truly wanted to know His reality in my life. I was very excited to learn I could be saved by sincerely praying a simple prayer I found in the back of this book. So I told Jesus I believed He was God, as He claimed to be. I thanked Him for dying for all my sins, past, present and future. I asked Him to forgive me all of my sins and come into my heart to be my Lord and Savior. The joy I experienced after praying this prayer was very great. I knew I had something special in my life, but it didn't occur to me to actually share my feelings and excitement with anyone. I did not know others actually believed that Jesus was real, as I did, and it was intensely personal anyway. Wonderful as it was, my salvation was not a magic wand that automatically showed me how to share my heart with others.

In my late teens into adulthood, I struggled with same-sex attractions. God designed each of us with a legitimate need for affection, relationship, and emotional bonding from our parents. Because I never got this legitimate, God-given relational need met through my mom, I later hungered for it from other women. I know now, that an emotional bond and healthy admiration for my mom would have helped me identify more with my feminine side. It would have met that legitimate, God-given need that I so hungered for later in my life. Because this God-given need was never met as He intended, I felt different from other girls. I wasn't a like a boy, but I wasn't like any girl I knew either. I felt a little different from the other girls.

As a teenager, the hunger for affection and love from another woman overcame my detachment from them. But because of my belief in God and the Bible, I knew it was wrong to be with another woman. So I struggled against the desires, sometimes successfully, sometimes not, until I got married at age 25. The man I married really loved me, and I loved him very much as well. He was the best thing that ever happened to me, except for knowing Jesus. However, I still struggled, and my relationship with Jesus was not very close. I slowly drifted away from Christ over the years, and even though my life with my husband was very good, I became very discontent. I felt this discontentment could be eliminated by simply being who I was meant to be. I was gay and I was meant to be with a woman. If I stopped struggling and embraced my desires, my life would be perfect. Besides, intimate closeness and affection from a woman was what I had always wanted, and I didn't want to struggle against it anymore.

So I finally got involved with a woman I befriended at work. It was so exciting and I felt I had finally arrived - I had found what I had been looking for. It was fantastic for the first four months, but after that, the relationship started slowly breaking apart. I started seeing some real brokenness in my partner; not that I didn't have my own faults. She became more and more verbally abusive. I did not understand this verbal abuse at first, because her reactions and behavior didn't make sense. I have since learned that verbal abusers are broken too. They are stuck in a childhood pattern involving a one-up/one-down relationship, and don't know how to have a healthy adult peer-to-peer relationship. Anyway, I tried everything I could think of to make the relationship work, but it only got worse. Finally, after three years, I broke it off. I promised myself I would never be involved with a verbal abuser again.

Later on, I got involved with another woman. Although this woman was not verbally abusive, she was broken in other ways. Because of her dysfunctional childhood and unresolved issues, she had lived her whole life avoiding or killing pain with addictions. Her addictive coping mechanisms came out in a variety of ways. They manifested themselves through illegal drugs, prescription drugs, workaholism, alcoholism, and gambling, to name a few. It seemed as though she created one crisis in her life after another. After three years of problems, stress and crisis, I was finally at the end of my rope. I was so empty inside at this point I could hardly function. However, I was too afraid to commit suicide, so my last and only resort was to start crying out to God. I took long walks after work every day and poured out all my feelings and thoughts to Him. I began to realize that although I had left Him, He had never left me. As I poured my sadness, my loss, my anger, and my feelings out to God, my emptiness started disappearing. I liked that. I started getting into his Word and rediscovering how great it really was. How could I have ever left Him? In December of 1999, I recommitted my life to Christ.

At this point, I didn't want to have anything more to do with lesbian relationships. They started out wonderfully, but they ultimately didn't seem to work. I had never before experienced the abuse, problems and emptiness that I experienced as a result of these relationships. God says that we sow the wind and reap the whirlwind. Sadly, that is what had happened to me. Because of the bitter consequences of my actions, I felt I would no longer struggle with same-sex attractions, especially since I was now in a close relationship with God through Jesus Christ. When my brother-in-law mentioned something about getting involved in an Exodus group, I told him I didn't think I needed it anymore because of the "aversion therapy" I went through with my ex-partners. My brother-in-law agreed that might be so, but the group could also help me with the underlying problems that caused my same-sex attractions in the first place. Those underlying problems might come out in other ways, not just in same-sex attractions. That made sense, so I got involved in Portland Fellowship's "Taking Back Ground" program. It was very helpful to learn about the roots of homosexuality and lesbianism, triggers for acting out, healthy living tools, spiritual warfare, how to have intimate, healthy friendships, etc. What was especially important was the knowledge that most problems are rooting in relational brokenness with our parents, family, peers, and God. I learned much during the first year of this two-year program.

However, I didn't develop any close friendships with women that year. The second year, I started forgetting how miserable and empty my unhealthy relationships with women had made me. Winter depression began to trouble me and started longing for the affection of a woman again. But now I knew too much. I knew in my heart, through experience and through what God had shown me, that a lesbian relationship would not give me what I was looking for. It could bait me and hook me, but it could never give me the lasting fulfillment I desired. I knew only God and His truth could accomplish that. What I really needed was to draw close to the One who could truly satisfy my deepest longings.

God has shown me some invaluable things through this struggle. When I am not in a healthy, close intimate relationship with Him and others, any stress can act as a trigger for me to fall into old, accustomed patterns. In order to avoid being an unfortunate statistic, I need to have some close healthy friendships to fill that legitimate God-given need for closeness. If I don't fill that legitimate God-given need in healthy ways, I tend to start filling the need in unhealthy ways. Going even further, in terms of basic, practical, common sense, I must be a good steward of my own needs. I must maintain a healthy balance in all areas of my life. Instead of ignoring or trying to suppress my needs, I must take care of my emotional, physical, mental and spiritual needs. Only then can I consistently give back to others what God has given to me. I have learned that, not only is it okay, but it is healthy to be weak, to be in need, and to ask for help. We all have needs, but fulfilling them the world's way does not work; it only leads to problems or a downward spiral. But thank the Lord, that fulfilling them God's way, and according to His principles does work, and leads to real life with no regret.