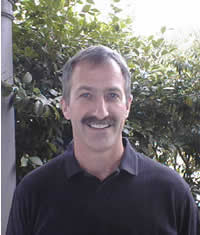 The strain of living a double life, frantically trying to hide my homosexual actions, had reached its peak. I was going crazy! I did not want to be gay. I needed help.

In desperation, I decided to talk to my parents. Tearfully, I shared with them that I was gay and that I wanted help. They were not totally surprised. They had wondered many times why I had such intense relationships with men and hardly any interest in women.

"Why don't you become a priest?" my dad suggested. That was hardly an answer to my dilemma. "Will you help me get some counseling?" I asked. They agreed, and I saw a therapist for a short time. He encouraged me that coming to terms with my self-hatred would solve everything. "It's OK to be gay," he said. I wondered, "Isn't there any hope of change?"

I grew up in a rural community outside Portland, Oregon, in a Christian home and attended a Christian grade school. As I grew older, I began to question the faith of my childhood. "Did God make a mistake when He made me?" I wondered. "Was I supposed to be a girl?"

I was more comfortable doing "girls" activities, always staying in the safety of home, yet wanting to be a part of the activities my brothers shared. I felt like I was on the inside looking out at a world I didn't fit into. Anything that had to do with sports or competition scared me. I hated being made fun of or being called a sissy, so I avoided activities that would bring about ridicule. I feared people's opinions of me. All I wanted was to be liked, especially by men. Masculinity scared me but still intrigued me.

My dad worked hard to support the family, at times working two jobs. I didn't think he liked me. He was harsh and critical. I was whiney and a bit spoiled. We could not connect. In reaction, I began to resent him, and eventually I rejected him as a father and role model. My mom, on the other hand, was a friend to me. I admired her loving nature and shared many interests with her. She played a key role in shaping my identity.

When I was 4 years old, an older boy in the neighborhood took an interest in me and gave me attention. I enjoyed it, not knowing that it was inappropriate. Then, when I was 7, another older boy drew me into physical sexual behavior. Again, I liked the contact, but this time I did feel guilty. It was then that the word "queer" was used, and suddenly I had a label to put with my feelings.

In school I was involved in music and art. They were a refuge from my insecurities. As I grew older, my fears increased. The ongoing nagging problem was that I did not like who I was. I considered suicide at the age of 13, but could not go through with it. The next year I began using drugs and alcohol.

In an effort to be liked, I came up with an image that people would accept. I created a hardened exterior to protect my vulnerable self. I grew my hair long, wore torn clothes, became rebellious toward my parents, and dreamed of making it as a rock star. Then I stopped going to church. My sexual desires had been suppressed, but I began to act them out, first through fantasy and masturbation, and then through sexual contact with other guys. This was painstakingly hidden--my secret life. The town I lived in was small, and any hint of being a homosexual meant ridicule and abuse. I became a great liar. The fear of my secrets being found out haunted me.

After high school, I moved to Portland. The city had more sexual opportunities, and I discovered a few gay bars. Still, even in the city, my fear of being identified as gay was more than I could handle. The more I read, the more confused I became. But was there hope for change? I searched Eastern philosophies, meditation, self-hypnosis, and self-help books but these all required discipline and inner strength, the very things I was lacking. Upon reaching this dead end, I concluded that I would be a homosexual all my life. I decided that I should be involved in legitimizing my sexual preference. I needed to "fight for my rights."

I started a full-time job, and at the same time became friends with a Christian. He was different from the Christian people I had known growing up. My religious background and my so-called search for truth led into many discussions of who God was. My friend invited me over to dinner with his family. We talked about Jesus, and I came to realize that I didn't know who he was talking about. The God of my childhood was cold and distant. His God was personal and powerful. Soon I found myself praying to know this God. God met me in a very personal way. I made a commitment to follow Him. I asked forgiveness for having lived a life of selfish pleasure-seeking. The love of God overwhelmed me. It was my sinfulness that drove me to God, yet it was His love that drew me to Him.

I didn't know how He was going to do it, but I knew I had found the way out of my homosexual struggle. I went on a cleansing spree that was inspired by the Holy Spirit. I removed everything from my home that was in conflict with my newfound faith. I flushed drugs down the toilet, I tossed out books and records. All I wanted to do was talk about my relationship with God. The people I hung out with soon found me annoying. I made them uncomfortable. I was challenged to stand with God, whether or not I was supported by friends or family. Up until then, I had lived for the approval of others. Could I live with just the approval of God?

I started going to a church. I would stay near the back and run out as soon as service was over. I loved God but felt so inadequate in relating to people that I would avoid them. Eventually I was asked to hand out the bulletin since I was already standing by the door. It forced me to meet people. God showed me His sense of humor. Slowly, I got to know some people, but the subject of my homosexual struggle was still a dark secret. This was not an easy time. I remember craving intimacy so intensely that I would curl up in a ball and cry myself to sleep. I had no one to talk to. I had stopped having sex with others, but fantasy and masturbation were a constant struggle.

Late one night, I got a threatening phone call from a man who accused me of being gay. All I could say into the receiver was, "Jesus is changing me." It became clear that I could not go on battling this alone. I made an appointment with my pastor, and surprisingly, he was very positive. One Sunday, the other guy who handed out bulletins shared that his neighbors were homosexual, and he felt they should know that they were going to hell. My pastor interrupted him and said that I had something I wanted to share. My mouth was dry, and my knees were shaking; I quietly shared that I had been a homosexual and that God was healing me. It was out! For the first time in my life, my homosexual struggle was out in the open. I wanted to run out, but people stopped me and said they were moved by my honesty.

Another turning point came in my relationship with my dad. He became ill and required a dangerous surgery. Suddenly, I was filled with emotions I had not felt before. I loved him and did not want him to die. God had softened the years of hardening in my heart toward him, and I let go of all that I was holding against him. I asked Dad's forgiveness for how I had treated him all these years. Our relationship began to be healed.

Through these challenges, my self-image began to change. I was becoming the man God had intended. Many things would follow over the years to bring about change as I followed God's leading. The most profound was my relationship with my wife. Our courtship was the sweetest time in both our lives. I had never experienced feelings for a woman, but my love for Patty was strong.

Who could have imagined that someone who had been involved in drugs, alcohol, and gay sex would be getting married? Now, thirteen years and five children later, we are still enjoying God's blessing. I got involved in ministry to let others, like myself, know that there was a way out. With God, nothing is impossible.