More Stories
Tom and Karen Sherwood are two of our beloved small group leaders here at Portland Fellowship. This month's newsletter features an interview that was adapted from a testimony they shared with their entire church in 2005. We are grateful for their bold reminder that God is actively performing the work of redemption in our lives and marriages. 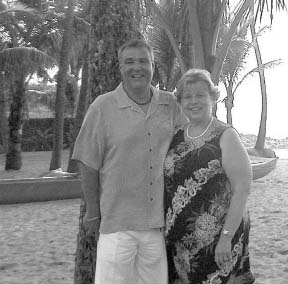 How would you describe the problems that were lurking beneath the surface of your lives:

Tom: Through my searching for male acceptance and approval I allowed myself to believe in the lies of Satan and gave into sexual sin. As a Christian and a married man I have struggled with homosexuality. I began by dabbling on the Internet with pornography out of curiosity and it eventually grew into a secret life that I kept hidden from Karen and others around me. This went on for several years with, what appeared to me as, very little ill effects on my family life. But over time things began to unravel and my life began to spiral out of control in this area.

Karen: I learned about co-dependency about 15 years ago and I knew this was apparent in my relationship with Tom. I have struggled with being addicted to an addict. At times I would be overwhelmed with a need to fix him and to take control of his out of control life, but for the longest time I couldn't figure out what his addiction was. I knew he had a problem with anger on certain occasions and I knew he had become distant where we had once had a very close relationship; but, I just attributed that to being busy with our three daughters and being active in the church and with our jobs. All the descriptions I had read about co-dependency were people who were married to alcoholics or drug addicts. I knew that wasn't Tom's problem. I just didn't get it.

Do you remember your thoughts and feelings as you lived with this unresolved sense of disconnect?

K: Many years later I began to get a glimpse into Tom's addiction. A few months after we got a home computer and the Internet, I knew that something was not right. I would wake up in the middle of the night and would find Tom online, but even later when I was sure he had a problem with pornography it never occurred to me that he was into homosexual porn. I was so confused. I'd nag at Tom about his constant use of the Internet, but so many things were happening in our lives that I just put Tom and my concerns about him on the back burner. I actually convinced myself for a time that my suspicions about Tom were not accurate, and that I was being over emotional, so I continued to keep busy.

T: Five years ago I reached a point where God revealed to me that my life was going down a dead end road and that I desperately needed help. I finally confessed to Karen what I had been dealing with, which was no surprise to her. She had felt in her heart that something was going on.

What was that like to hear from Tom the truth behind your suspicions?

K: When Tom finally reached the point that he disclosed to me, I had already figured out what was going on and had begun to face the reality that I couldn't live like this much longer. I secretly began to make plans to divorce Tom after our youngest daughter graduated from high school. Even though I knew in my head about Tom's struggle I was not prepared for the devastating effect it had on my heart when he finally admitted his struggle to me. I could no longer live under the shelter of denial and my world could never be the same. I had to face some very painful truths: I had been betrayed, deceived- I had lived a lie. I was relieved on one hand, but was deeply wounded and had growing feelings of anger and resentment toward Tom. I felt ignorant, stupid, naive, embarrassed, shamed, and used; and, I was full of fear that anyone else would find out about the terrible state my life was in, so I was more than willing to agree with Tom that no one would know our horrible secret.

T: She was able to forgive me and I asked God to forgive me. I stopped my destructive behavior by sheer will power, but I did not seek outside help and we didn't get the help we needed to heal the root issues. We made a mistake and continued to keep this a secret. I would not allow Karen to share with anyone what we both were dealing with. It was then that Karen and I basically took matters into our own hands. Sure we prayed to God to help, but we basically we went along as if nothing had happened.

Were things resolved after the disclosure?

T: It worked for a few years and then I again found myself back in the same secretive life and again my addiction began getting the best of me. After pretty much hitting rock bottom a friend of mine invited me to attend Promise Keepers in Kansas City in September of 2003 and I attended. The very first night during a time of surrender the Lord really spoke to my heart and I went forward and knelt upon that arena floor before the cross and surrendered before God my struggles. I cried out to God that I could no longer fix the problem on my own and pleaded before God to take control of my life and this struggle. Returning home I knew that I couldn't just stop there. I learned from the last time that I would need help in this area of my life. Through research on the Promise Keepers' web site I was lead to Portland Fellowship. Through this ministry I began my journey two years ago out of sexual bondage. Just as the Israelites were led by Moses out of Egypt from the bondage of slavery, God is leading me out of my land of Egypt. Karen has been a part of this journey with me. The wives group at Portland Fellowship has given her a better understanding of what my struggles are and the underlying root issues. For the first time, I began to believe with all my heart that God loved me and forgave me when I turned my back on my past sin. He welcomed me home.

K: When Tom returned from Promise Keepers in September, 2003 he again had to confess his sin to me. But this time forgiveness didn't come as easy for me as it had three years earlier (not that it had been easy the first time). I just wasn't sure I could do it again. I prayed to God and cried out to him and asked "How many times do I have to forgive this man of such a devastating sin!" and I clearly heard Jesus words, "Seventy times seven..." I thank God that he lead us to the ministry of Portland Fellowship. In the wives group, over two years ago, I first shared my deepest darkest shameful secrets and it was then that God began to work in our lives and perform miracles in our marriage. It was only when Tom and I took our guilt, shame, denial, and fears and laid them down at the foot of the cross and let go of our need to control and let God be God, that our healing truly began.

How would you describe your lives today?

T: The Lord has transformed my life from the inside out. I am no longer bound by my old thoughts and desires. A scripture that I leaned on in my recovery process is Proverbs 3:5, "Trust in the Lord with all your heart and lean not on your own understanding; in all your ways acknowledge him, and he will make your paths straight." Karen and I both feel God is calling us to continue at PF as part of the leadership team. We want to offer other married couples the Hope of the Lord Jesus Christ that we are continuing to experience. God alone can transform lives. I am no longer playing "god" over my struggles; I am allowing God to be in control of my life, and that has made all the difference.

K: Tom and I bear witness to the power of God at work in the lives of His people. Time and time again, we have known the power of Philippians 1:6 - "We are confident that He who began a good work in you will carry it on to completion until the day of Christ Jesus." We are living testimonies to His power of healing. God is good and He is so faithful.